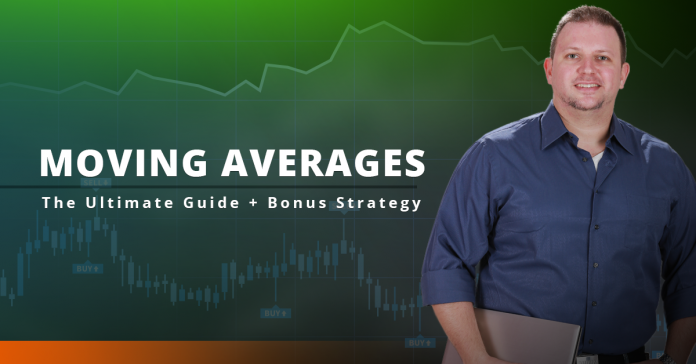 The “The Ultimate Guide” series has become really popular and I received emails from readers who enjoyed the articles, asking for more. Here is the next one: Moving Average. Indicator with long history that you can probably see on the chart of 90% of the traders.

A widely used indicator in technical analysis that helps smooth out price action by filtering out the “noise” from random price fluctuations. A moving average (MA) is a trend-following or lagging indicator because it is based on past prices. The two basic and commonly used MAs are the simple moving average (SMA), which is the simple average of a security over a defined number of time periods, and the exponential moving average (EMA), which gives bigger weight to more recent prices. The most common applications of MAs are to identify the trend direction and to determine support and resistance levels. While MAs are useful enough on their own, they also form the basis for other indicators such as the Moving Average Convergence Divergence (MACD).

Here is another good summary from the guys over businessdictionary.com that i want you to go over:

Mean of time series data (observations equally spaced in time) from several consecutive periods. Called ‘moving’ because it is continually recomputed as new data becomes available, it progresses by dropping the earliest value and adding the latest value. For example, the moving average of six-month sales may be computed by taking the average of sales from January to June, then the average of sales from February to July, then of March to August, and so on. Moving averages (1) reduce the effect of temporary variations in data, (2) improve the ‘fit’ of data to a line (a process called ‘smoothing’) to show the data’s trend more clearly, and (3) highlight any value above or below the trend.

There are three types of MAs that you can use according to your needs. They all work in a similar way with some small differences in the mathematical formula used for their calculation.

This calculations give you the average sales in the period of 5 years. When you do that for all data available you will have 6 average numbers which if you plot on a chart, will be a Simple Moving Average.

Some traders believe that giving priority and focus on most recent prices would better represent the price movements.

The exponential average also slightly differs from what the SMA is doing. In SMA there is a period that we define, for example 10, and every time a new price is available the oldest one will be replaced with the newest one. This way the moving average is always calculated based on the 10 most recent prices.

When calculating EMA we won’t replace the oldest one, instead we will just add the new available price and keep all behind it. If we set a period of 10, when new price becomes available the moving average will be calculated on 11 prices. Then again when a new price is available we add it to the current 11 and we get 12 prices that the EMA is based on.

Depending on your needs you should figure out which moving average works best for you. The SMA is perfect to determine the current market direction for example (period of 20-30 or so) but it is rather slow and lagging. WMA on the other hand focuses on the more recent prices and you can expect more fluctuations and sharp moves, causing it to give false signals more often.

It is all about testing. Place a few of them on your chart and play with it. See what works good and what it doesn’t.

As a rule of the thumb we can say that:

One of the very popular ways to use moving averages is when you combine two or more MAs with different periods. When the MAs cross a signal is given. This strategy on its own is not as reliable as one might expect. Especially when it comes to the forex market and intraday charts. Best would be to implement other filters in addition to the MA crossover and test the combination thoroughly before going live.

Usually when the faster MA cross above the slower MA, that would be a buy signal and vice versa. As you can see from the example above a lot of false signals would occur thus the need of extra filters.

Whatever combination of Moving Averages you are using, you will notice that when there is a strong trend, the two MAs would move away from each other pointing up or down. During the times of market uncertainty, or consolidation, the two lines would trade horizontally and it would get very close to each other, almost overlapping. This is where the market is in a zigzag and you may want to change your system.

Such whipsaw times are ideal for range trading, if you can define a range of course. Sell high, buy low.

So how to spot the range?

See how price was trending down, MAs got away from each other and then at some point started consolidating, getting closer and moving horizontally, rather than going down. At this point you expect the price to go into consolidation (range). Check out the price action for important levels. I have marked 4 such support/resistance levels creating a range based on the price action before the potential range. Magically price respects these levels and bounces off of them.

If this is the H1 chart, when you notice the price moving into a range you can drop to the lower time frames like M5 and M15 and look for entries near the horizontal lines. A very small risk versus a high potential reward – good risk:reward ratio in other words.

Range start approximately where the blue vertical line is. MAs start getting closer and trade horizontally. Drop to M15/M5 to find entries near the Support/Resistance level that you have marked on the h4 chart.

Now given the fact that price is ranging over 70-80% of the time, having a solid range strategy could be really beneficial. Keep in mind that that the lower time frame entries could be based on literally anything as long as it gives you a good risk:reward ratio. The two types of entries above are just examples of how I prefer trading this situations.

For your targets you can use fixed 1:2 (at least) risk:reward ratio or just aim the next support/resistance level that you have marked on your chart.

Looking forward to hear your comments on the subject and how you use MAs in your trading!