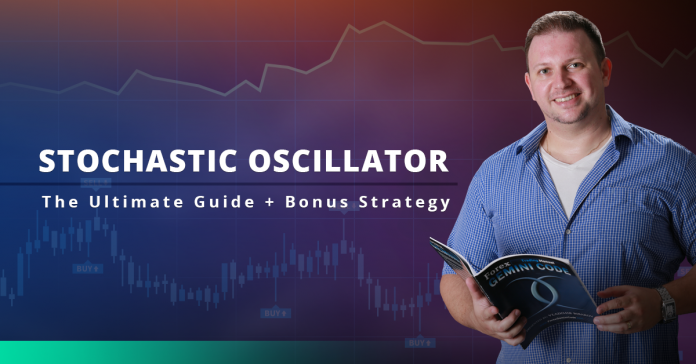 Stochastic Oscillator is one of the most commonly used indicators among traders. It measures the momentum of the financial instrument and it moves between the fixed levels of 0 and 100.

%D is the 3-day moving average of %K (the last 3 values of %K). Usually this is a simple moving average, but can be an exponential moving average for a less standardized weighting for more recent values. There is only one valid signal in working with %D alone — a divergence between %D and the analyzed security.

As already mentioned above, the stochastic indicator moves between 0 and 100 levels, and it consists of two lines.

To put it in simple words, the indicator will show you how the current price compares to the highest and the lowest price over a past period of time. By default, this past period equals 14, which in other words would mean 14 bars/candles. In the H1 time frame that would be 14 hours for example.

How To Use The Stochastic Oscillator?

Stochastic is used to detect overbought/oversold price zones, divergences and crossovers. Let’s take a look at all of them one by one.

Some traders consider and use the levels 70/30 as an indicator of overbought/oversold (OB/OS) however I like to use 80/20 levels. Once the price is trading above 80 the instrument is considered overbought. On the other hand, if the indicator reads 20 or below, it is in the oversold zone.

Ideally, that would mean one thing – price is now going to reverse. In reality, this is not always the case and the indicator might stay in extreme (OB/OS) for a long time while the price is still pushing. That happens because the indicator is just telling us that price is near the top or bottom of the last 14 periods.

For example, when that was a range, the price would eventually break out of this range and it won’t reverse near the oversold/overbought zone. Here are two perfect examples illustrating exactly these scenarios:

As I said that usually happens when a range or strong support/resistance level is finally broken and there is strong momentum.

Stochastic could be used to spot divergences. If you don’t know what divergences are seen this post where you will also find a Cheat Sheet for all types of divergences.

Divergence alone shouldn’t be used as an entry point. Like most things in trading, it is best if you would confirm a given signal with at least one more indicator/method/technique before you pull the trigger.

Many traders rely on the crossover as an entry signal. Again, in my opinion, this is wrong as you need extra confirmation. I’m not aware of even one indicator that will produce stable, consistent profitable signals by itself. The more confirmations you have the better.

The most common way of using crossovers is to wait for the price to reach an OB or OS zone, followed by a crossover.

Notice how only after the third crossover price actually changed its direction. Another interesting fact is that price created bearish divergence and a false break between the 2nd and 3rd cross. Think about this one and how you can create your own trading method out of it!

Drawbacks of the Stochastic Oscillator Indicator

The main problem with Stochastic would be that it is too sensitive and it would give a lot of premature signals. Often when there is a strong trend it would give you an indication that the market is overbought or oversold (exit signal) and you might get out of a good trade too early. On the other hand, when used as an entry signaler, it might give you signals too early.

The conclusion here is that this is an amazing indicator but you must study it, play with it, test it and only then apply it to your live trading. I know traders who rely entirely on this indicator to make a full-time living. So yes, it really depends on how you are going to approach it.

Below I have included a simple strategy that I have developed back in the days. Very simple and easy to understand even for beginner traders.

This strategy aims to catch the beginning of new strong trends (even if they are micro-trends) that produce a vast amount of pips in a short period of time. The combination of strong move followed by a very shallow (tight) correction, is usually a signal that price has more to go in the original direction as the trend is very strong at the moment. Our goal and idea is to get on board during that correction and ride the second wave.

Time Frame: H1 and above.

Stop Loss:
1. A more aggressive approach for the stop loss is right below the last low that was created (or above the last high created for a sell). This way you will have an amazing risk vs reward ratio.
2. Conservative stop loss would be below 38,2% Fibonacci when buying and above this level when selling.

Target 1 – always aim to collect the first target when the price has reached 1:2 risk: reward ratio. What that means is, if your stop loss is 50 pips, when the trade is in positive 100 pips (twice as much the stop loss), close the first part. That could be anywhere from 50% up to 80% of the initial lot size that you have used. For example, if you have used 1 lot, when you reach target 1, close 0,5 lots up to 0.8 lots and leave the other part running. Once you collect profits at target 1 move your stop loss to break even to risk the freedom of the trade.

Let’s have a look at another example:

Stochastic goes to the opposite extreme zone (overbought) while the price is still above 38,2%. Cross happens and we get a bullish candle. At the end of this green candle (marked with the blue arrow), we would enter a buy trade.

Projecting the final target using the same distance as the first wave, starting from the lowest low of the correction, before the buy signal.

The Cross over on stochastic happens, price is below 38,2% and we have a bearish candle. This is our sell entry signal. However when we check the final target we see that the risk:reward is really bad. In such situations it is better to wait for the next setup to occur.

One more sell example compiled in a single picture but you should be able to pick it up already:

The last tip, if you are not really sure where the correction ended, in order to project your final target correctly, you can always use last high/low or Fibonacci bo 23,6%. Most time the deviation won’t be that great and when the setup has bad risk: reward it is obvious – a few pips won’t make much difference.

And one last gift for those of you who managed to read this article to the end – here is my free e-book on stochastic and its secrets – DOWNLOAD.