Having survived several attempts to move back below the 10c barrier, vechain remains somewhat bullish when compared to its peers.

In my main scenario, I suggest that vechain has completed its correction in wave 4, where the medium regression of the base channel lays. The structure seen on the chart is an impulse wave to the upside, in both grey and blue degrees. However, the correction in blue wave (ii) seems incomplete.

There are currently two scenarios in play here: a running or an expanding flat.  A running flat decline to ~10c will hint at a shallow decline and a faster recovery to the upside. Whereas an expanding flat variation will likely drive prices close to the 7c barrier and offer a deeper correction instead.

In either case, the upside legs since the rejection below the 6c seem to have identical impulse and correction patterns.

With multistructural moves often indicating expansions to the direction they unroll, the end of the correction in wave c of (ii) could sends us back near the ~30c barrier, where the 1.618% Fibonacci extension of grey i-ii lay.

Breakdown Risk Remain, But Its Limited

In my alternative scenario, I point at a double zigzag pattern, which means the correction wave 4 has not yet been completed. The internal structure following May’s crash suggests yet another double zigzag in grey wave x which completed on only recently. However, we should remain cautious of another abc pattern towards the upside, taking into account the probability of wave (y) being an ending diagonal (see highlighted (y)).

Should the former alternative plays through, then prices will likely break the previous low near the 5c., or at least revisit this territory in grey wave y.

Only there could we receive further insights as to the short and medium term trajectory of vechain. 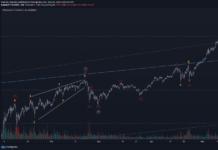