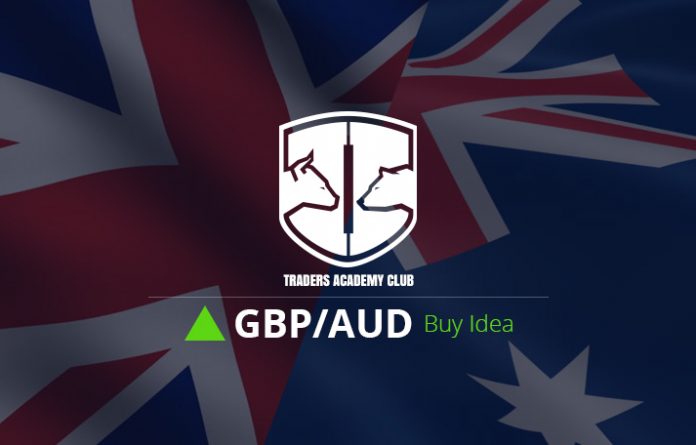 Hi Traders! GBPAUD forecast update and follow up is here. On July 2nd I shared this GBPAUD Forecast And Technical Analysis post in my blog. In this post, let’s do a recap of this setup and see how it has developed now. If you would like to learn more about the way we trade and the technical analysis we use then check out the Traders Academy Club. Spoiler alert – free memberships are available!

On the daily chart, the price which is moving lower has currently reached a support zone. In addition to this, the 1.80 psychological area coincides with this support zone which makes this area a strong support zone for us. Also, we have a bullish divergence that has formed between the first low that has formed on 4th June 2020 and the second low that has formed on 30th June 2020 based on the moving averages of the MACD indicator and also on the RSI indicator which we may consider as evidence of bullish pressure. We may now move down to lower timeframes and see if we can find evidences supporting this bullish view.

Looking at the H4 chart we could see that we have a bullish divergence that has formed between the first low that has formed on 19th June 2020 and the second low that has formed on 30th June 2020 based on the moving averages of the MACD indicator which we may consider as evidence of bullish pressure. Also the ADX indicator gave a bullish signal at the cross of +DI (green line) versus -DI (red line) and the main signal line (silver line) reads value over 25, we may consider this as another evidence of bullish pressure. In addition to this, the price has also broken above the most recent downtrend line which we may consider as yet another evidence of bullish pressure. So the bottom line here is that the H4 chart has evidences supporting the bullish view.

On the H1 chart, the price which is moving higher has created a bullish trend pattern in the form of three higher highs, higher lows which we may consider as evidence of bullish pressure. Currently, it looks like a correction is happening, once this correction completes itself we may then expect further continuation higher.

On last Friday (July 3rd) in my Weekly Trades Summary post I shared an update regarding this idea which is as follows:

Current Scenario – Currently it looks like a deep correction is happening, until the H4 downtrend line breakout holds my view remains bullish here.

Currently, we have a potential bearish divergence in play on the H1 chart, this is something that we definitely need to pay attention to as it is an opposite evidence. So if you are still involved in the buys then this is a very important place to consider and manage your trade (cash out or partial cash out or trailing protections or partial hedge, etc.. depending on the strategy that you work with). When you find an opposite evidence you should always consider managing your position.