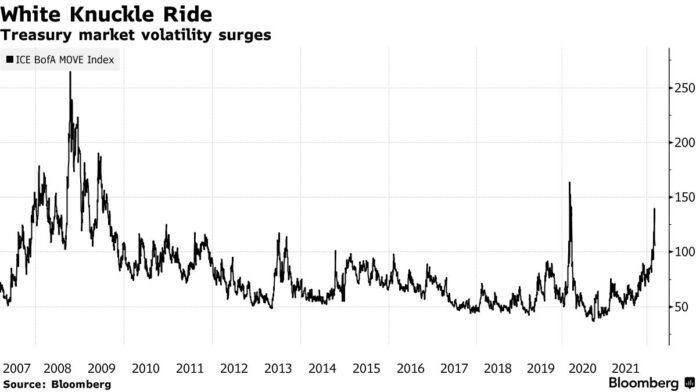 The surging volatility in the world’s biggest bond market is challenging traders trying to play both tighter global monetary policy and a war-induced commodity price shock that’s raising the specter of 1970s-style stagflation.

Treasuries rallied sharply after the Russian invasion of Ukraine amid a rush into the safest assets, spurring a race to buy insurance against another unexpected rise in prices. Then last week the pendulum swung back just as swiftly, with 2-year yields surging to more than two-year highs as a steep jump in consumer prices underscored the case for the interest-rate hikes the Federal Reserve is almost certain to begin on Wednesday. Renewed selling pressure on Monday propelled the 10-year yield up 11 basis points to 2.10%, its highest level since July 2019, while the five-year note climbed above 2% for the first time in three years.

The fierce swings are creating a conundrum for traders: While there’s a ton of money available for anyone brave enough to take a position, serious pain awaits those who get it wrong — and making an informed call is almost impossible in such a rapidly changing environment. The push and pull has sent one widely watched gauge of implied price swings in Treasuries to levels not seen since the March 2020 crash early in the pandemic or after the 2008 credit crisis.

In the face of that, some hedge funds have been treading carefully to avoid being stung by wrong-way bets, deleveraging and liquidating positions. Long-term investors have increased wagers that long-dated Treasuries — a traditional haven — will outperform as the growth outlook dims. Smaller investors have meanwhile been adding cash into some actively managed exchange-traded funds focused on short-term debt to ride it out, a trend that was prevalent since the year began.

“Without doubt this is a trader’s market,” said John Brady, managing director at RJ O’Brien, a futures brokerage in Chicago, pointing to the opportunities for seizing on yield differentials that hadn’t been there during the past two years of near-zero interest rates.

The swings mirror the volatility in markets more broadly as stocks, bonds and currencies are whipsawed by investors seeking to gauge the impact of the war on the global economy. That’s increasing the opportunity for nimble traders — but also the risks of being on the wrong side of an another about-face.

The Treasury-market moves since Russia’s invasion of Ukraine was for “hedge funds and hot money accounts the greatest value-at-risk shock since March 2020,” said Citigroup Inc. strategist William O’Donnell, adding that the bank’s measure shows turnover in the Treasury market has declined from elevated levels. “There was a view that it was a fertile trading environment and now there is mood of we should walk on rice paper and throttle back on trade sizes.”

Treasuries are coming out of one of their worst weeks in the past decade, losing the equivalent of all their interest payments over the past year in five days. An index of Treasuries is down 3.8% this year, more than it’s lost in any full year on record in Bloomberg data beginning in 1973.

On Thursday, the European Central Bank also surprised markets by announcing a faster-than-expected wind down of its monetary stimulus and the U.S. Labor Department reported that consumer price inflation jumped in February to a fresh four-decade high.

The commodity-price increase since last month represents a fresh shock that will likely slow the pace of economic growth just as rates are rising. That has fueled already strong demand for so-called flattening trades — wagers that short-term rates will rise more steeply than long-term ones as the outlook dims. On March 7, the gap between 2- and 10-year Treasury yields narrowed to as little as 19 basis points, the smallest since March 2020, when Covid-19 began shutting down the U.S. economy.

But while traders are trying to decide whether they have the stomach to place a bet, long-term investors are focused on protecting themselves from some of the growing downside risk. Flows among some pensions and insurance companies have focused on buying options in the 10- to 30-year sector that would become profitable if the economy materially slows next year and yields fall from current levels, according to Citigroup’s O’Donnell.

Western Asset, which had nearly $500 billion under management at the end of last year, has started to move one of its main funds more into to longer-maturity securities, said Molly Schwartz, a portfolio manager. “We are shifting some front end exposure further out the curve,” said Schwartz.

The jump in rates has provided some benefits to individual investors, who are able to reinvest interest and principal payments in higher-yielding bonds. Recent Treasury auctions also showed solid demand, with Thursday’s 30-year bonds sold at yields below those in the market at the time bids were due.

The volatility also appears to be increasing interest in some exchange-traded funds that seek to actively manage risk and focus on short-term Treasuries, said Todd Rosenbluth, head of ETF and mutual fund research at CFRA Research. He cited inflows seen this year for funds from firms such as Pacific Investment Management Co. and JPMorgan Chase & Co.

“Historically investors have been willing to trust active bond managers can navigate market uncertainty by finding extra income with less risk,” said Rosenbluth. “Understandably, flows this year have gravitated toward providing some protection from rising rates as opposed to last year when risk was favored in fixed-income ETFs.”

For those investors who have remained defensive and maintained low levels of interest-rate risk exposure, the rise in yields may provide an opportunity to move back in.

“We are still short duration and trying to get back to neutral, so any backup in the 10-year to 2% looks fair value to us,” said Jack Ablin, chief investment officer at Cresset Capital.