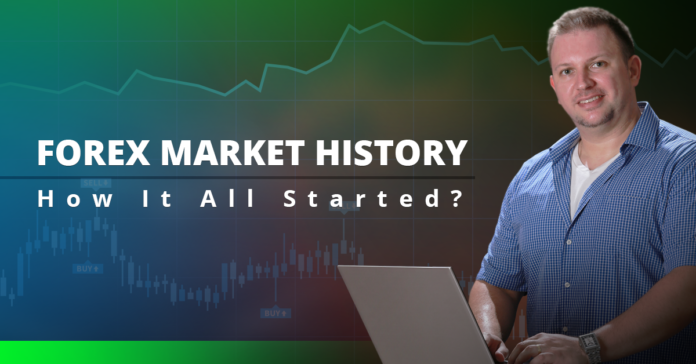 Have you ever wonder about the Forex market history? Do you know how it all started and when? The foreign exchange market was very different years ago and I believe you will find the information below really interesting.

Speculation – An attempt to profit on the fluctuation in prices for currencies and other investment securities.

The Bretton Woods Accord – Courting Controversy

Gold Standard Currency – A commitment to fix the value of a currency to a specific quantity of gold. Under this system, the holder of the country’s currency can convert funds to an equal amount of gold.

Fiat or Floating Currency – Fiat currency is the opposite of a gold standard arrangement. In a fiat currency system, the currency’s value rises and falls on the market in response to demand and supply pressures. It is this fluctuation that makes it possible to speculate on future currency values.

The Bretton Woods Agreement, established in 1944, fixed national currencies against the dollar, and set the dollar at a rate of 35USD per ounce of gold.

In 1967, a Chicago bank refused to make a loan in pound sterling to a college professor by the name of Milton Friedman because he had intended to use the funds to short the British currency. The bank’s refusal to grant the loan was due to the Bretton Woods Agreement.

This agreement aimed at establishing international monetary steadiness by preventing money from taking flight across countries, and curbing speculation in the international currencies.

Prior to Bretton Woods, the gold exchange standard – dominant between 1876 and World War I – ruled over the international economic system. Under the gold exchange, currencies experienced a new era of stability because they were supported by the price of gold.

However, the gold exchange standard had a weakness of boom-bust patterns. As an economy strengthened, it would import a great deal until it ran down its gold reserves required to support its currency.

As a result, the money supply would diminish, interest rates escalate and economic activity slowed to the point of recession.

Ultimately, prices of commodities would hit bottom, appearing attractive to other nations, who would sprint into a buying fury that injected the economy with gold until it increased its money supply, driving down interest rates and restoring wealth into the economy.

Such boom-bust patterns abounded throughout the gold standard until World War I temporarily discontinued trade flows and the free movement of gold.

The Bretton Woods Agreement was founded after World War II, in order to stabilize and regulate the international Forex market.

Participating countries agreed to try to maintain the value of their currency within a narrow margin against the dollar and an equivalent rate of gold as needed. The dollar gained a premium position as a reference currency, reflecting the shift in global economic dominance from Europe to the USA.

Countries were prohibited from devaluing their currencies to benefit their foreign trade and were only allowed to devalue their currencies by less than 10%. The great volume of international Forex trade led to massive movements of capital, which were generated by post-war construction during the 1950s, and this movement destabilized the foreign exchange rates established in the Bretton Woods Agreement.

1971 heralded the abandonment of the Bretton Woods in that the US dollar would no longer be exchangeable into gold. By 1973, the forces of supply and demand controlled major industrialized nations’ currencies, which now floated more freely across nations. Prices were floated daily, with volumes, speed and price volatility all increasing throughout the 1970s, and new financial instruments, market deregulation and trade liberalization emerged.

The onset of computers and technology in the 1980s accelerated the pace of extending the market continuum for cross-border capital movements through Asian, European and American time zones. Transactions in foreign exchange increased intensively from nearly $70 billion a day in the 1980s, to more than $1.5 trillion a day two decades later.

Evolution of an Open Forex Market

Why We Have Richard Nixon to Thank

The Bretton Woods Accord was not popular with every country included in the agreement. By linking many European economies to the U.S. dollar, the dollar became the de facto world currency. This made it impossible for sovereign nations to manage the value of their own currency.

Some U.S. officials were likewise unhappy with tying the U.S. dollar to the price of gold. With this arrangement, a run-up in gold prices also forced the value of the dollar upwards, and this contributed to the inflation crisis of the early 1970s.

Market-Maker – A dealer or broker that provides a two-way quote (i.e. a bid and ask price) for which the dealer agrees to buy or sell. Offering both sides of a trade literally “makes” a market for those wishing to engage in currency trading.

The rapid development of the Eurodollar market, where US dollars are deposited in banks outside the US, was a major mechanism for speeding up Forex trading. Likewise, Euro markets are those where assets are deposited outside the currency of origin.

The Eurodollar market first came into being in the 1950s when the Soviet Union’s oil revenue – all in US dollars – was being deposited outside the US in fear of being frozen by US regulators. That gave rise to a vast offshore pool of dollars outside the control of US authorities.

The US government imposed laws to restrict dollar lending to foreigners. Euro markets were particularly attractive because they had far fewer regulations and offered higher yields.

London was and remains the principal offshore market. In the 1980s, it became the key center in the Eurodollar market when British banks began lending dollars as an alternative to pounds in order to maintain their leading position in global finance.

London’s convenient geographical location (operating during Asian and American markets) is also instrumental in preserving its dominance in the Euro market.

U.S. Inflation and the Energy Crisis

A hedge is the practice of buying a physical commodity to protect against a possible currency devaluation.

The Interbank Market and OTC Trading

The Rise of Web-Based Trading and Forex Market-Makers

Thanks guys glad you enjoyed

Thanks for sharing Forex market history . The info you have posted is really really informative.Keep posting such interesting articles.

Great article..so now I know the history and its origin 🙂