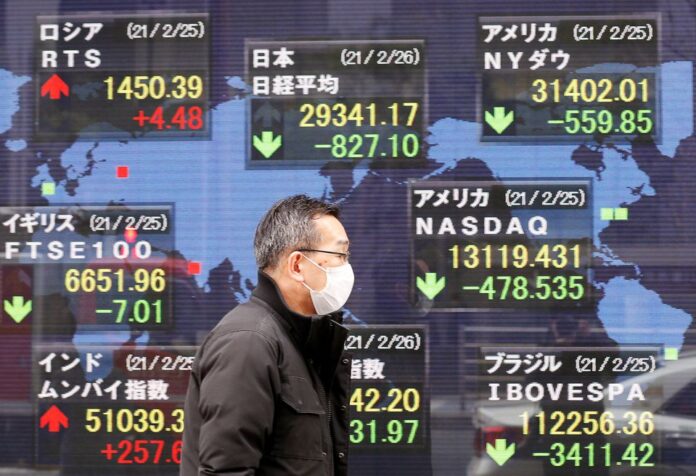 U.S. stock futures and European stocks fell into the red on Monday, with markets remaining nervous that Russia could invade Ukraine despite attempts to defuse the crisis.

U.S. President Joe Biden and Russian President Vladimir Putin have agreed in principle to hold a summit on the Ukraine crisis.

A summit would be held only if Russia did not first invade Ukraine, which Western countries have said it could do at any moment despite repeated denials.

The Kremlin said there were no concrete plans in place for a summit, but that a call or meeting could be set up at any time.

“The Kremlin made clear today that they are in no rush for a summit with Biden,” said Tim Ash, strategist at BlueBay Asset Management.

British foreign minister Liz Truss said she was stepping up preparations with allies for the worst case scenario in the Ukraine crisis, adding that a Russian invasion was highly likely.

In a reminder of the stakes, Reuters reported Biden had prepared a package of sanctions that includes barring U.S. financial institutions from processing transactions for major Russian banks.

The Russian rouble fell 1.5% to its lowest in nearly four weeks and Russian shares hit their lowest in 14 months.

Markets are also expecting an aggressive tightening by the U.S. Federal Reserve as inflation runs rampant. The Fed’s favoured measure of core inflation is due out later this week and is forecast to show an annual rise of 5.1% – the fastest pace since the early 1980s.

At least six Fed officials are set to speak this week and markets will be hyper-sensitive to their views on a possible hike of 50 basis points in March.

Recent commentary has leant against such a drastic step and futures have scaled back the chance of a half-point rise to around 20% from well above 50% a week ago.

Oil had suffered its first weekly loss in two months last week, taking it off seven-year highs, amid signs of progress on an Iran deal that could release new supply into the market.

Iranian foreign ministry spokesman Saeed Khatibzadeh said “significant progress” had been made in talks to revive Iran’s 2015 nuclear agreement on Monday after a senior European Union official said on Friday that a deal was “very, very close”.

Gold has benefited from its status as one of the oldest of safe harbours, climbing to nine-month highs of $1,908 an ounce, before dropping back to $1,894 an ounce .