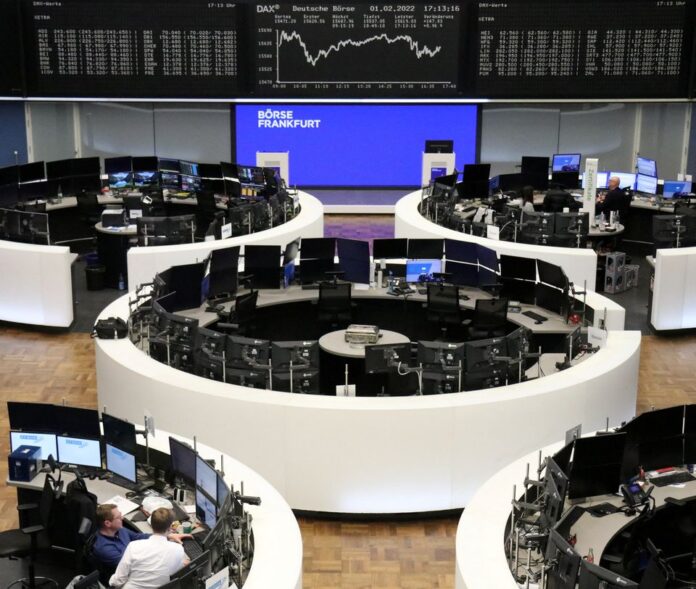 The euro and sterling edged lower as the European Central Banks and the Bank of England faced their inflation challenges on Thursday, while stock markets turned red again after a downbeat status update from the firm formerly known as Facebook.

Europe’s main bourses were down 0.5% as the BoE delivered its second UK interest rate hike in three months, investors anticipated a more hawkish ECB and the shock of Wednesday’s 20% plunge in Facebook owner Meta’s shares (FB.O) continued to bite.

In the currency market, the defensive mood allowed the dollar to regain its footing. Inflation pressures were weighing on bonds, although with more central bank activity due in Frankfurt shortly it felt like the real action was still brewing.

The BoE’s move to raise its rates to 0.5% had been widely expected amid the global surge in inflation. Just before that, Britain had joined a number of governments around the world in announcing an energy bill subsidy plan.

Over in Frankfurt, the ECB was not likely to offer up any immediate policy changes after its meeting, but this week’s record high euro zone inflation reading and recent strong labour data have raised expectations for a more hawkish Christine Lagarde at the bank’s 1330 GMT news conference.

“The equity markets took a beating yesterday,” said Societe Generale analyst Kit Juckes. “They haven’t moved much further this morning, but the risk-positive move we had at the start of the week has definitely run out of steam ahead of all the central bank meetings”.

Other social media companies were also expected to fall hard when trading resumes, including Twitter (TWTR.N), Pinterest (PINS.N) and Spotify (SPOT.N), which also gave a disappointing update and has been beset by a COVID-19 vaccination misinformation row.

“Investors looking at Meta are starting to realize that buying their stock is no longer mostly an investment into their ad platform,” said Flynn Zaiger, CEO of social media agency Online Optimism.

“It really turns off investors when a core holding falls 20% in one day,” added Dennis Dick, a proprietary trader at Bright Trading. 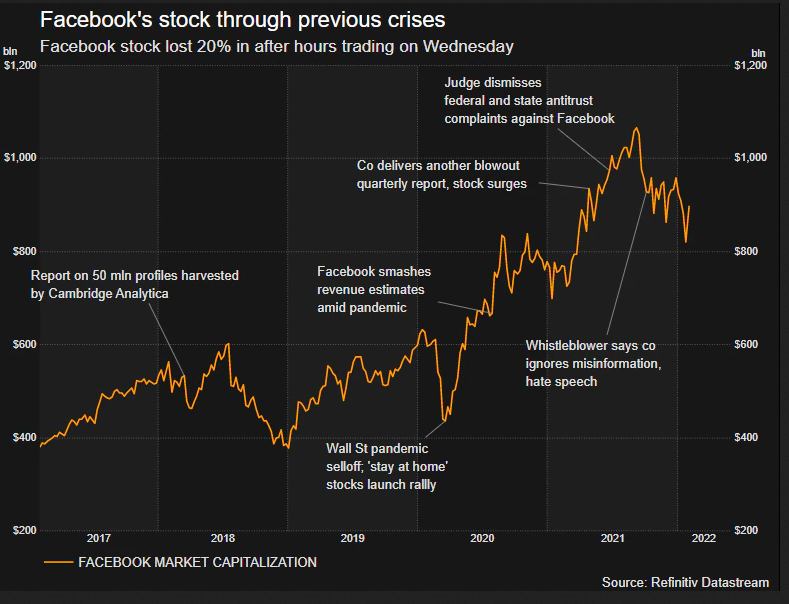 Wall Street will also be keeping an eye out for jobless claims data at 8:30 a.m. ET, expected to show the number of Americans filing new claims for unemployment benefits dropping further.

ISM economic activity data is also due out and is likely to show a dip in the U.S. service sector last month due to the coronavirus issues.

In emerging markets, pressure was building on Turkey’s lira again after inflation there came in at nearly 50%. Russia’s rouble also dropped as tensions over Ukraine were fanned by the movement of 3,000 U.S. troops to eastern Europe.

As oil prices eased after OPEC and its allies stuck to a plan to moderately increase output, and after Wednesday’s U.S. ADP jobs data had been weaker than hoped.

“This morning’s dip might be a result of the shockingly low U.S. ADP employment print last night, but we believe the supply squeeze may drive oil prices higher through this year,” said Howie Lee, economist at OCBC in Singapore.