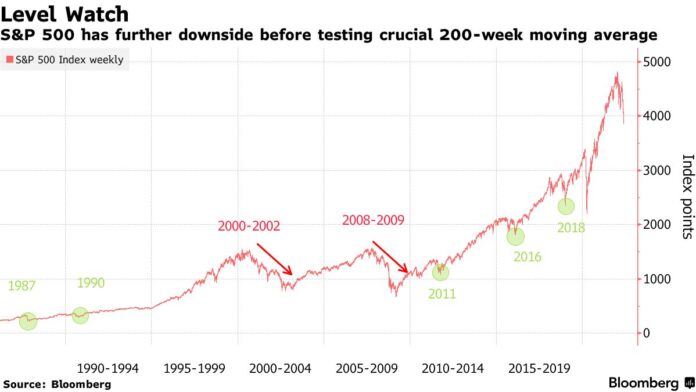 Stocks fell as investors assessed the latest signs of economic malaise from the US and China amid speculation about the Federal Reserve’s rate-hike trajectory. Treasuries gained, while the dollar held steady.

The risk of an economic downturn amid price pressures and rising borrowing costs remains the major worry for markets. Goldman Sachs Group Inc. Senior Chairman Lloyd Blankfein urged companies and consumers to gird for a US recession, saying it’s a “very, very high risk.” Traders remain wary of calling a bottom for equities despite a 17% drop in global shares this year, with Morgan Stanley warning that any bounce in US stocks would be a bear-market rally and more declines lie ahead.

The New York Fed’s data are the first of several regional Fed manufacturing numbers set for release over the coming weeks. Similarly disappointing figures may temper bets on a steep rate-hike cycle as the Fed battles inflation. Meanwhile, China’s industrial output and consumer spending hit the worst levels since the pandemic began, hurt by Covid lockdowns.

Meanwhile, the European Commission warned the euro area’s pandemic recovery would almost grind to a halt, while prices would surge even more quickly if there are serious disruptions to natural-gas supplies from Russia. Traders are also watching efforts by Finland and Sweden to join the North Atlantic Treaty Organization in the wake of Russia’s invasion of Ukraine.

Cryptocurrencies dipped as the mood in stocks weakened. That took Bitcoin back to around the $30,000 level.