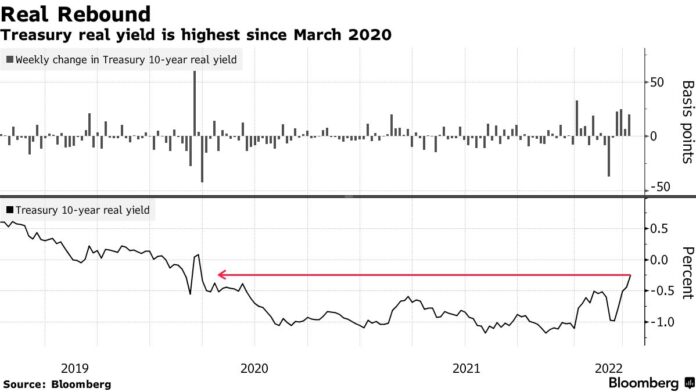 Ten-year Treasury yields climbed five basis points to 2.65% after jumping 20 basis points in the previous three sessions. A gauge of the dollar’s strength held near a three-week high after the latest employment data did nothing to dispel expectations of aggressive policy tightening.

The Fed minutes showed officials were focused on tamping down inflation and outlined plans to pare the balance sheet by more than $1 trillion a year. Though hawkish, the minutes provided some clarity for investors who were concerned that a too-steep tightening path could stall economic growth. Meanwhile, St. Louis Fed President James Bullard said Thursday rates may still need to rise 300 basis points.

“With a clear vision of the cadence and tempo of both rate hikes and balance sheets reduction, the market’s reaction function to hawkish commentary should be far less volatile,” wrote Art Hogan, chief market strategist at National Securities. “The Fed has delivered a concise monetary policy roadmap that is well inside of street consensus, and one that has been effectively priced into both equities and Treasuries.”

Applications for U.S. state unemployment insurance fell last week by more than forecast as employers hold on to workers in an increasingly tight labor market, data showed Wednesday, backing the Fed’s contention that the economy is strong enough to withstand rate increases.

Europe’s Stoxx 600 gained about 0.2%, boosted by a rally in shares of Atlantia SpA, the billionaire Benettons’ highway and airport group, after a non-binding bid from Global Infrastructure Partners and Brookfield Asset Management Inc.

The energy sector was in the red, dragging the U.K.’s benchmark FTSE 100 down, as Shell Plc’s hit from its withdrawal from Russia weighed on oil producers. The statement from the London-based giant shows that, despite a surge in oil and gas prices, Russia’s invasion of Ukraine has upended the supermajors’ plans and left them scrambling to adapt to historic shifts in energy markets.

Commodity markets continue to be whipsawed by disruptions sparked by Russia’s war in Ukraine and efforts to curb raw-material costs. WTI crude climbed toward $98 a barrel, paring a slump that was triggered by the International Energy Agency’s decision to deploy 60 million barrels from emergency stockpiles.

Raw materials could surge by as much 40% — taking them far into record territory — should investors boost their allocation to commodities at a time of rising inflation, according to JPMorgan Chase & Co.

“The war, in its position now, has been priced in. But we don’t know what Putin will do next. That’s where the uncertainty lies,” Fiona Cincotta, senior market analyst at City Index, by phone. “The other area to focus on is sanctions.”

In China, officials will use monetary policy tools at an “appropriate time” and consider other measures to boost consumption, according to the readout from a meeting of the State Council chaired by Premier Li Keqiang on Wednesday.

Key events to watch this week: