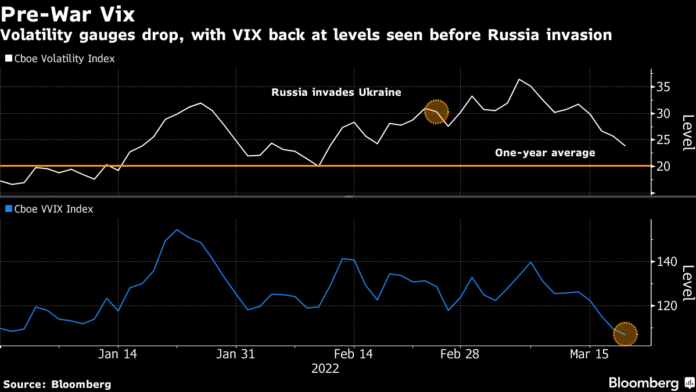 West Texas Intermediate oil rose toward $110 a barrel as investors assessed the war as well as Middle East tension. Australia’s ban on exports of alumina to Russia sparked an advance in aluminum. A gauge of the dollar advanced.

A key question is whether last week’s stock rebound and drop in volatility are durable. European equities have already recouped all of their losses triggered by Russia’s invasion of Ukraine nearly a month ago as optimism as the lure of cheapened valuations draw investors back.

But a historic spike in commodity prices on supply concerns shows little sign of easing, keeping traders on high alert over inflation and shaking their faith in the Federal Reserve to douse price pressures while keeping the economic recovery on track.

“The Fed comes out last week and basically tells you they have to do more — into higher inflation but slowing growth,” Brian Weinstein, head of global fixed income at Morgan Stanley Investment Management, said in an interview with Bloomberg TV. “It certainly looks like the market is afraid of a traditional Fed goes too much, slows the economy down, and we don’t get the much-anticipated soft landing.”

The bond market continues to flash caution about the economy. The Treasury yield curve is flattening, and portions are inverted, which for some is an indicator of a looming economic slowdown. The 10-year U.S. yield climbed to about 2.18%.

Traders will monitor a speech later Monday by Fed Jerome Powell, less than a week after he and his colleagues kicked off a rate-hiking cycle. Markets expect the Fed to lift its target rate to around 2% by the end of this year.

Meanwhile, U.S. President Joe Biden will speak with European leaders ahead of his trip to the continent this week. Senior U.S. officials will also meet with executives of Exxon Mobil Corp., JPMorgan Chase & Co. and other firms about the impact of the invasion and sanctions.

The war in Ukraine and the resulting sanctions over Russia have sent the raw-materials markets into a tailspin, with the potential for shortages in key commodities like oil and wheat as exports are disrupted.

Ukraine rejected a Russian demand that its forces lay down their arms Monday and leave the besieged southern port of Mariupol, which has been under intense Russian bombardment.