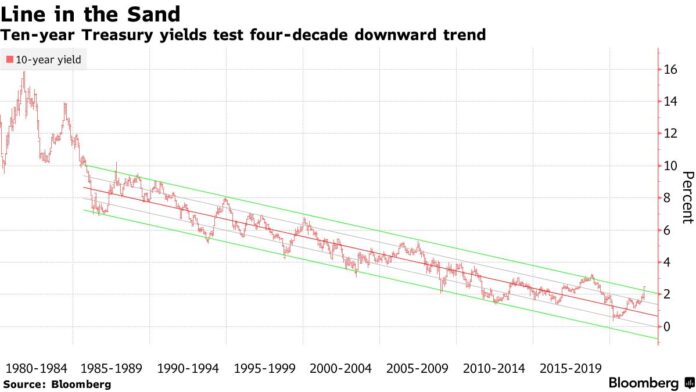 The 10-year Treasury rose, sending the yield down to 2.45%, from a session high of 2.55%. Earlier yields on five-year Treasuries rise above those on 30-year bonds, suggesting some investors expect an economic downturn.

Still, the war in Ukraine continues to disrupt supplies of key commodities, stoking inflation risks that are contributing to expectations of more aggressive Federal Reserve tightening. Mobility restrictions in China may fan worries about rising costs.

“The risk of recession in the next two years has risen dramatically as we now have a central bank that will ultimately have to kill off the recovery to tame inflation,” said Kellie Wood, deputy head of fixed income at Schroders Australia. “It looks a lot like 1994, where we believe the U.S. cash rate can move up to 2.5-3% in 12-18 months.”

Tesla Inc. plans to suspend production at its Shanghai plant for at least one day, people familiar with the matter said. The electric-vehicle maker rose in premarket trading after saying it plans to seek shareholder approval for a move that would enable another stock split.

In the latest geopolitical developments, Ukrainian and Russian negotiating teams are set to resume in-person talks this week. President Joe Biden tried to temper comments calling for the removal of Vladimir Putin by saying the U.S. isn’t seeking regime change in Moscow.

Global shares have recovered from the lows sparked by Russia’s invasion, but questions remain about the durability of the equity market advance.

It may be that what we’re seeing is “more a bear-market rally,” Chris Weston, head of research with Pepperstone Financial Pty, wrote in a note. He added that investment flows related to portfolio rebalancing at the end of March and the first quarter could lead to “big and questionable moves.”