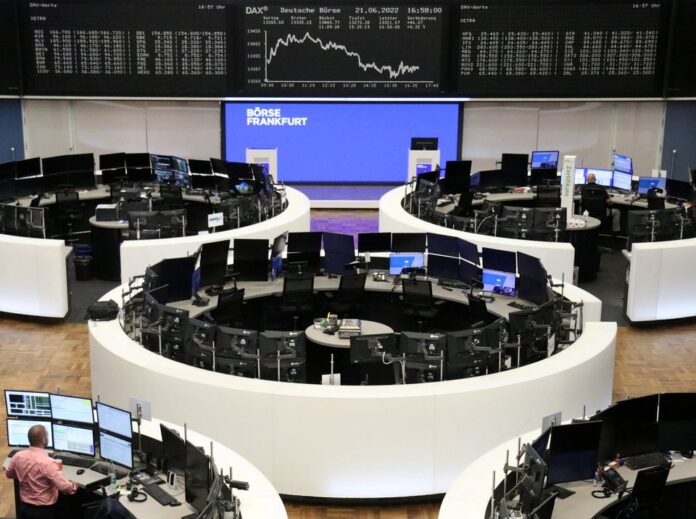 Prospects for a firm start on Wall Street helped European shares claw back from a new low for the year on Thursday as investors weighed the risk of hefty interest rate rises tipping economies into recession.

Stronger U.S. futures helped shares in Europe (.STOXX), reverse an earlier fall to a 2022 low on the back of dismal economic data in Germany and France.

Crude oil also recouped earlier losses but copper remained at 16-month lows as fears of a slowdown cast a pall over the red metal.

U.S. Treasury yields remained lower on Thursday after Federal Reserve Chair Jerome Powell, in testimony to the U.S. Senate Banking Committee on Wednesday, underlined the central bank’s commitment to cutting inflation at all costs and acknowledged a recession was “certainly a possibility”.

“Coming into this year, we thought you might be able to avoid (recession) this year, but certainly the data has started to come in much more negative,” Schwartz said.

In a further sign of market caution, JPMorgan analysts said more investors were turning to cash, surpassing its previous peak in March 2020, when markets went into a tailspin due to COVID-19 lockdowns.

The German economy, Europe’s largest, suffered a sharp loss of momentum at the end of the second quarter, according to the latest Purchasing Managers’ Index, while corresponding figures for France also showed weaker activity.

UniCredit bank said the data, which sent euro zone bond yields plunging, was sounding an alarm bell, suggesting that growth momentum might be weakening sooner and more quickly than expected.

Prices of copper and crude oil fell on prospects of less demand for fuel and building materials as consumers limit spending.

Spencer said there has been so much damage to stock markets that they had largely discounted a recession already.

“If you look at the data, I think at worst what you are looking at is, maybe, a mild recession. I believe the markets are in a bottoming process, and maybe you’ve only got another 5% downside,” Spencer said.

Concerns about the demand outlook have sapped commodity prices, with oil tumbling on Thursday to the lowest in more than a month.

Iron ore was already at six-month lows, having lost more than 20% in recent weeks, while copper struck a 16-month trough.

In foreign exchange markets, the dollar rose 0.340%against a basket of major currencies. The index was up more than 8% this year, reflecting the broad risk-off sentiment and the dollar’s Fed-driven yield advantage.