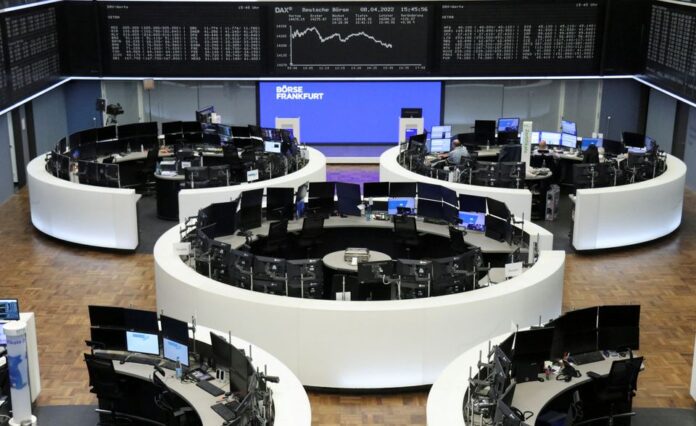 U.S. Treasury yields rose to multi-year highs on Monday, while the euro strengthened and the spread between French and German bond yields narrowed after French President Emmanuel Macron won a larger than expected vote share in Sunday’s election.

With 97% of the votes counted for Sunday’s presidential election first round, Macron garnered 27.6% of the votes and far-right candidate Marine Le Pen won 23.4%. Macron will now go into a runoff against Le Pen on April 24.

A Le Pen victory could send shockwaves through France and Europe in ways similar to Britain’s vote in 2016 to leave the European Union (EU).

The spread between the French 10-year yield and its German peer narrowed by over 5 basis points (bps) to 48.9 bps.

“While Macron’s first round lead over Le Pen was bigger than he managed in 2017, polls point to a much narrower race for the second round (53-47%),” Danske Bank analysts said in a note.

“With Macron’s re-election far from assured, markets will keep a close eye on polls in the coming two weeks.”

The mood in equity markets was cautious with the MSCI world equity index (.MIWD00000PUS), which tracks shares in 50 countries, lower by 0.2%.

“You have to have a bias to the market overall – the bias in our mind is negative because of this combination of slowing growth, higher inflation and higher yields, tighter financial conditions,” said Hani Redha, multi-asset portfolio manager at Pinebridge Investments.

The weakness in markets on Monday could be particularly attributed to the continued sell-off in U.S. Treasuries and Europe’s government bonds, he added.

Ten-year Treasury yields rose as high as 2.7840% during Asia-Pacific trading hours, the highest level since January 2019, for a 125 basis point rise so far this year. Bond yields move inversely with prices.

With the Federal Reserve not set to hold a monetary policy until May, Redha believes U.S. yields will continue moving in an upward direction

“This is the kind of path of least resistance right now,” he said.

Markets have raced to price in the risk of larger rate hikes from the Federal Reserve with futures implying rises of 50 basis points at both the May and June meetings.

This underlines the importance of the March U.S. consumer price report on Tuesday where the median forecast is for a leap of 1.2%, taking annual inflation to an eye-watering 8.5%.

China’s inflation figures surprised on the high side on Monday although were still relatively modest at 1.5% year-on-year in March.

But that still saw yields on China’s ten-year government bonds fall below U.S. Treasury yields for the first time in 12 years on Monday. 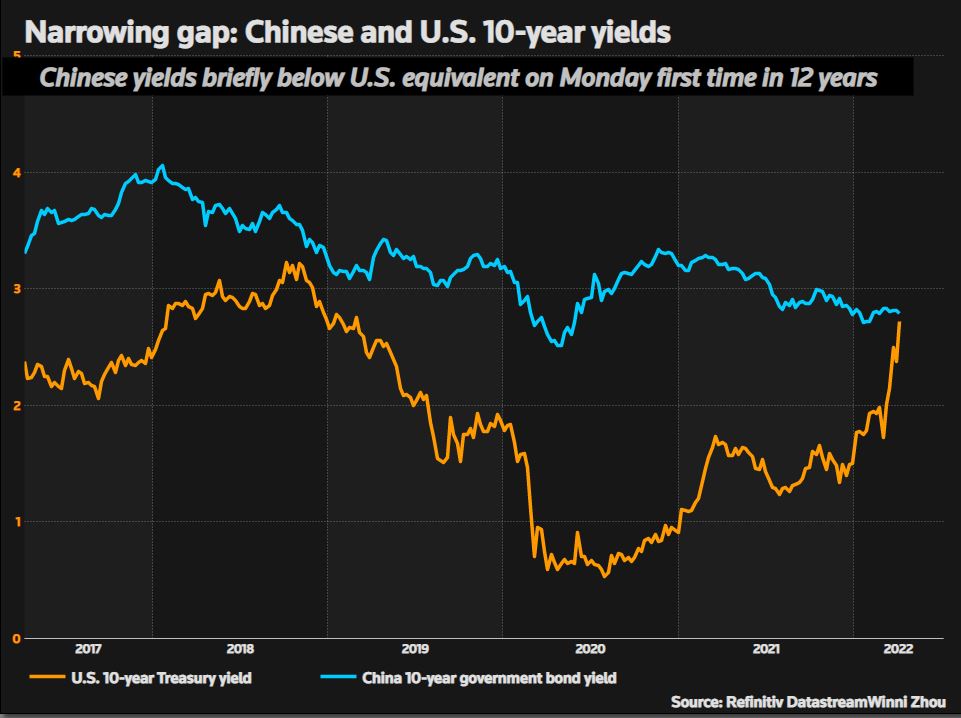 Oil prices were lower on plans to release record volumes of crude from strategic stocks and as Chinese lockdowns continued. [nL2N2W9023]