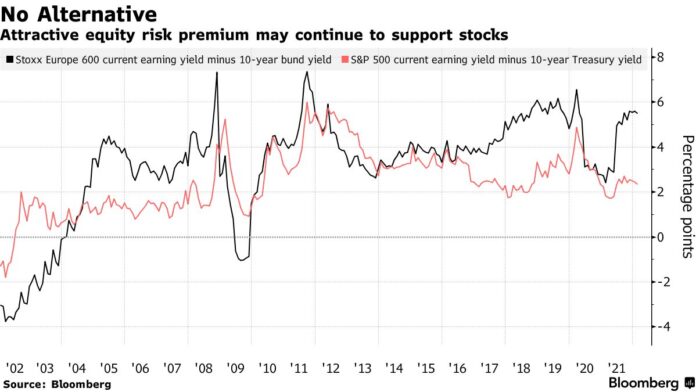 U.S. stocks rose in early trading on Monday as investors took stock of the outlook for monetary policy ahead of key inflation data later this week. Treasury yields ticked higher and a rout in European sovereign bonds deepened.

Investors are grappling with the prospect of the steepest monetary tightening cycle since the 1990s, with markets pricing in more than five quarter-point Federal Reserve interest-rate hikes in 2022 following a strong U.S. jobs report. The U.S. inflation report this week could lead to more market volatility. A reading north of 7%, the highest since the early 1980s, is expected.

“The repricing of Fed rate hikes has lost momentum as investors await more clarity on the impact of the pandemic and soaring energy prices on the U.S. and Fed outlook,” Credit Agricole strategists including Valentin Marinov wrote in a note. “Looking ahead, focus will be on the U.S. CPI and the January Fed minutes. it would take fairly positive inflation surprises and hawkish FOMC signals to revive the dollar rally in the near term.”

The Fed is in a difficult spot, “trying to manage the real economy where we see that hot inflation and the financial economy, which quivers every time we talk about rate rises,” Karen Harris, Bain & Co. global head of macro research, said on Bloomberg Television.

Greek debt led a selloff in European peripheral bonds after European Central Bank Governing Council Member Klaas Knot said he expects a rate increase as early as in the fourth quarter. The ECB last week made a hawkish pivot, with President Christine Lagarde no longer excluding a rate hike this year.

“The momentum trade has been to short bonds and many are now fearing higher bond yields will really start to bite in equity land,” Chris Weston, head of research with Pepperstone Financial Pty Ltd., wrote in a note.

Meanwhile, Bitcoin climbed above $42,000 to the highest in over two weeks. The rally in crude oil stalled at around $92 a barrel.

In the latest on Ukraine, President Joe Biden and his French counterpart Emmanuel Macron spoke about responding to Russia’s military buildup on the Ukrainian border. Moscow has repeatedly denied that it plans an attack.

On the virus front, Hong Kong is set to report another record number of infections. Australia will allow double-vaccinated visa holders to enter the country from Feb. 21, ending about two years of strict international border controls. China locked down a city of 3.6 million people.