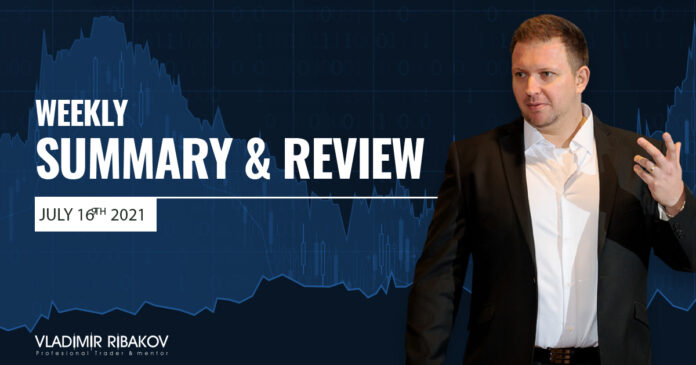 Hi Traders! Weekly summary and review July 16th, 2021 is here. It is now time to recap and summarize the trade setups that we had during this week. Below you will find the short explanation of all the trade setups we had in this week and how it has currently developed now.

CHFJPY – My idea here was “On the H4 chart after the strong bearish move, the price is currently moving inside a range. This range is formed by the highs and lows reaching parallel support and resistance zones. The price which is moving inside this range has currently reached the top of it. Also, while measuring the first wave using the Fibonacci expansion tool we could see that the 100%(121.142) Fibonacci expansion level of the first wave coincides with the top of this range which makes this area a key resistance zone for us. The price which was moving higher reached this key resistance zone, respected it and is currently bouncing lower from this zone. Also, based on the Stochastic Oscillator we could see that the price has reached its extreme and is bouncing lower which we may consider as evidence of bearish pressure. In addition to this, based on the Parabolic Sar we could see that the dot is above the price which we may consider as yet another evidence of bearish pressure. Until this key resistance zone holds my short term view remains bearish here and I expect the price to move lower further”.

GBPNZD – My idea here was “On the H4 chart, the price has created a bearish divergence between the first high that has formed at 1.99282 and the second high that has formed at 1.99561 based on the MACD indicator. The price then moved lower and broke below the low at 1.98250 creating lower lows, thus forming a classical setup of bearish divergence followed by bearish convergence. Hence as per the book scenario, after a bearish convergence, we may look for possible corrections and then further continuation to the downside. Currently it looks like a correction is happening. So the bottom line here is that the H4 chart has evidences supporting the bearish view. Until the strong resistance zone shown in the image below (marked in blue) holds my short term view remains bearish here and I expect the price to move lower further”.

Current Scenario – Based on the above-mentioned analysis my view was bearish here and I was expecting the price to move lower further until the strong resistance zone holds. After the bearish convergence the pullback that I was looking for happened and then the price moved lower further delivering 200+ pips move so far.

NZDUSD – My idea here was “Looking at the H1 chart, we could see that the price which is moving higher has created a bullish trend pattern in the form of three higher highs, higher lows, we may consider this as evidence of bullish pressure. Generally, after a bullish trend pattern, we may expect corrections and then potential continuation higher. Currently, it looks like a correction is happening. Also we had two strong resistance zones and the price which was moving higher has broken above both these zones and is holding above them. Currently these two strong resistance zones are acting as two strong support zones for us. Until both these support zones hold my view remains bullish here and I expect the price to move higher further. Alternatively, if the price moves lower and if we get a valid breakout below the low at 0.69173 then this bullish view will be invalidated”.

Current Scenario – In this pair the price action followed my analysis exactly as I expected it to. After the bullish trend pattern the price which was moving lower reached the first strong support zone and created a false break of it. The price then moved higher further delivering 70+ pips move so far. 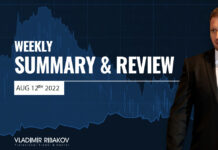 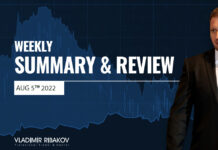 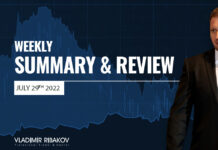